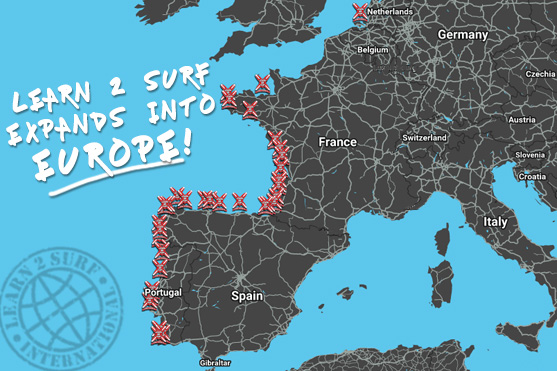 On a quest to expand the LEARN 2 SURF network into Europe, founder Anthony Scholte (Ant) spent from February till mid May exploring the entire European west coast.

His goal was to personally inspect all of the most popular ‘learn to surf’ locations and to discover the alternative, lesser known, less crowded surf spots.

What info was he looking for?
Ant was very interested in the current state of the surf school industry in Europe. How the schools operated within each country’s rules/regulations, whether the traditionally popular surfing locations had possibly outgrown themselves, and to generally check out who is who in the European surf school zoo. His end goal being to find surf schools that meet the strict LEARN 2 SURF criteria and to invite them to join the LEARN 2 SURF international network.

Was it necessary to actually go to Europe?
Aside from the opportunity to do an epic surf trip/adventure, was it necessary to spend so much time, money and effort in personally going to every beach on the west coast, to achieve above goals?

Google can provide tons info and reviews for surf schools in any surf town but Ant’s goal for LEARN 2 SURF was to go beneath the Google layer, to investigate deeper into the European surf scene. Ultimately, to get the inside scoop from the guys who live and surf there.

Local Knowledge
Google has lots of info but first hand experience and local knowledge is always your most accurate and reliable source of information for any surfing area.

Ant visited all of the most popular beginner surfer beaches, and explored many others as alternative options to the more crowded spots. Being there in person, meant he could personally watch and see how the tides effected the safety of the surfing conditions for beginner surfers at each beach, as well as speak to locals about any potential hazards or dangers that beginners should be made aware of.

He could also watch the surf schools! ‘Spy on them’, if you like. Check how their instructors operated, what conditions they coached in, and how much attention their clients received. Taking note of how involved/interested the owners of the school were in their businesses: was their main priority to push as many clients through their school as possible, were they a ‘factory surf school’? Or is sharing their love of surfing with others, still a primary motivation for doing what they do?

Most of Ant’s most valuable discoveries came from meeting with local surfers. Chatting to guys and girls in the water, meeting board-shapers, surf shop and surf school owners and surf instructors, and hearing from them exactly what’s happening in their local surfing communities. Ant’s common question: Which school would you trust the most with the safety of your children? The more people he chatted to, the more the same schools’ names kept coming up, the more certain he was that he was meeting the right people.

After a being introduced to some first class surf schools and having explained his quest to them, these schools then referred Ant to other schools that were along his travel route. The recommended  schools were either good friends of the guys Ant had previously met, or schools who they believed operated in a manner that would meet LEARN 2 SURF standards.

Before he knew it, this network of quality European surf schools started to grow itself!
Ant met with school after school, experiencing incredible hospitality, meeting inspiring business owners doing inspiring work, and discovering and surfing some of the most beautiful uncrowded beaches you can imagine! (see pics below)

Which areas did he explore?
It was an extremely comprehensive trip. Starting in the south west corner of Portugal, moving all the way up the west coast, around the north west corner of Spain and along the north coast to the French Basque Country. Then up the French west coast, out west and around Brittany (Bretagne) and finally all the way from Normandy through Belgium to The Netherlands.

(Although surf can be found on the Mediterranean coast, Ant’s search focused on the Atlantic coastline as this open ocean coast receives the most consistent swell/waves – a crucial ingredient for surfing)

Overall trip conclusion?
Europe is an absolute goldmine of world class surf spots!
These spots range from super safe sand bottomed beginner breaks to countless coves with perfect point breaks, reef breaks, slabs and even giant big wave spots. Europe has every kind of wave for every kind of surfer!

Any warnings?
Yes! Some spots get very crowded!
Surfers have been exploring the European coastline in greater numbers since around the early 1960’s. And today many/most European surfers have their own transportation and can afford to travel. So you would think that all the best quality waves would have been discovered decades ago and would be totally overcrowded by now. This is true. All the famous breaks and most surf spots near the larger towns/cities can get ridiculously crowded.

Avoid crowded beaches
Surfers can be like sheep – maybe it’s a ‘safety in numbers’ mentality, who knows. Contrary to this behavior, our top priority as wave hungry surfers should be to avoid crowds! Crowds are frustrating. Crowds mean more waiting and fewer rides. And more often than not, crowds are dangerous! Tempers can flare when waves are few (‘surf rage’ is a real thing), and the chance of a collision, the most common cause of surfing related injuries, is much higher.

What’s the good news?
The good news is surfers can be like sheep – so while the majority flock to the crowded spots, this leaves loads of alternative surf spots all over Europe where you can avoid the crowds. IF you’re prepared to venture a bit further (20-40mins down the road) a surfer’s paradise can be yours!

This is exactly what Ant did. And he met some super surf schools at the best beginner beaches and invited them to join the Learn 2 Surf network/family.

Check out our maps for PORTUGAL, SPAIN & FRANCE. All of the locations we have listed (and will be adding) receive amazing waves and at many of them (if you follow Ant’s Top 5 Tips below) you can find solitude in the most beautiful of surf set ups.

1. Avoid traveling during major holidays or peak summer season.
Prices are cheaper and the waves are better in the winter months – and it’s far less crowded.

2. Avoid beaches near big cities or towns that are ‘famous’ for surfing.
These spots get very crowded! The country/rural areas are absolutely beautiful, the locals are friendly and beaches are uncrowded.

3. Mobility is key – have your own transportation.
Preferably a vehicle you can sleep in – to save accommodation costs.

4. Practice good surf etiquette and be friendly.
Being polite and showing respect to the locals goes a long way to ensuring a more pleasant surfing environment. They also might decide to share some of their local knowledge with you.

5. Use LEARN2SURF.net !
We’ve done all the searching for you! Simply check the locations of our surf schools, and use them as a guide for places to target on your next surf trip.

Bonus Tip: Avoid Toll Roads
They save you travel time – but you’ll be paying extra to miss out on all the scenery and unique character of the country you’re visiting.

But wait! There’s more! Subscribe to our Newsletter
We will be posting loads of local Tips & Info on ALL of the regions that Ant travelled through in future blog posts