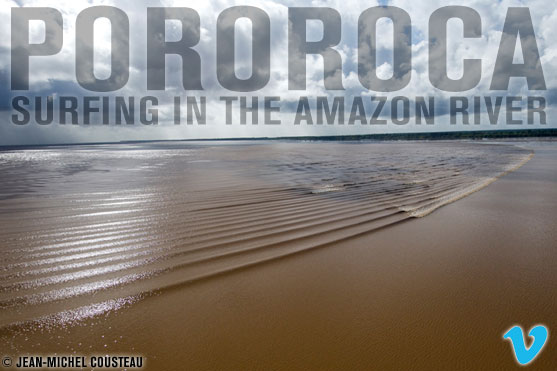 Pororoca: Surfing in the Amazon River

The Pororoca is a tidal bore, that sends waves up to 4 metres high as far as 800 km inland upstream on the Amazon River.

As you can imagine, 4 meter high river waves can cause quite a bit of damage to communities living on the banks of the river – hence the meaning of ‘Pororoca’ from the indigenous Tupi language, where it translates into “great destructive noise”. It could be also a Portuguese version of the term poroc-poroc, which in the native indigenous’ language was a way of expressing the act of destroying everything.

The river wave has become very popular with surfers and the phenomenon is best seen in February and March.

Since 1999, an annual championship has been held in São Domingos do Capim (on the adjacent Guamá River). In 2003 the Brazilian Picuruta Salazar won the event with a record ride of 12.5 km lasting 37 minutes. The longest time captured on tape riding the wave is also by Picuruta, lasting 43 minutes.

Surfing the Pororoca is especially dangerous, as the water contains a significant amount of debris from the shores of the river (often entire trees), in addition to dangerous fauna.